A Luxurious And An Expensive Train Covering Various Places

The tour is the most important one for people who stay at various places. Everyone enjoys going to various places. Moving to a location is like a great thing that happens in every life. It brings in happiness and also fun to families, on the whole. The more you explore places, the more you enjoy it. It depends on the areas you visit, and also the comfort factor plays a role meanwhile. When you decide to go on a tour, mostly people suggest taking railways as an option. It turns out to be the cheapest as well the easiest and also the economical option to use. 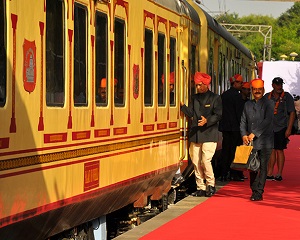 The palace on wheels is a luxurious train which is introduced by railways, mainly focusing on tourism. This was in fact launched by the railways with Rajasthan Tourism Development Corporation with the focus on promotion of tourism in the state of Rajasthan. This was introduced in the year of 1982, around 36 years ago. Later which, it was relaunched by the month of August in 2009, with the different varieties of cuisine and itinerary. This train was voted as the luxurious train in the world by the year 2010.

Palace on wheels India started its initial operations on 26th January. This concept got derived from the royal background of coaches, as those were to be the personal coaches of early and former rulers of princely states of Rajputana, the Nizam of Hyderabad, etc. the interiors were designed by Monica Khanna, who did the excellent and amazing works of interiors. Everything represents the olden and ancient and also traditional as well cultural ethos of Rajasthan being seen in the paintings, furniture, etc. There are around 23 coaches, where 104 tourists can travel in the same train. Each coach has the amenities like Wifi, Internet, and also the needed amenities. 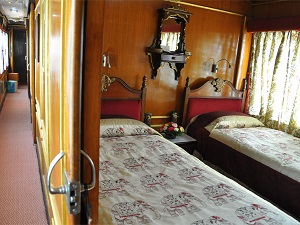 The palace on wheels travel has restaurants named as the Maharaja and the Maharani, which is the ambience of Rajasthani style, it serves the traditional cuisines where the train also has a bar. The palace on wheels tour is such a great tour which covers various places like New Delhi, Jaipur, Chittaurgarh, Udaipur, Jaisalmer, Jodhpur, Bharatpur and Agra. It turns out to be travelling for 7 days and 8 nights, and it is an ultimate amazing and lovely journey.