The Best Time To Spend With Your Family Experiencing Rajasthani Ambiance

What more people would require these days more than a vacation? People don’t need more than the timing; it’s the one where a family can unite. When families unite, nothing more is needed in the life. It can make people feel energetic and also make them enthusiastic as they can visit many places and can explore areas and new destinations. It can help families to find time together. That is the most important thing which families or individuals would look for.

The palace on wheels is a luxury train that is concentrated on tourism. This option was launched by the railways department, in collaboration with Rajasthan Tourism Development Corporation mainly to promote on the tourism part of Rajasthan.  Indian railways have done it for the sake of people to explore areas in Rajasthan.

This train service was commenced by 2009 in the month of August, whereas it was started by the year 1982, around 36 years ago. Now that it was totally a new one launched with different types of itinerary and cuisines which people like the most. The decor is seriously amazing.

This train was voted to be the most luxurious train in this world, by the year 2010. This concept had its initial stage and was derived from royal background of the coaches. These were to be the personal rail coaches of the early rulers of the states Rajasthan, Gujarat, etc. as well for the rulers of the Nizam of Hyderabad, Viceroy of British India, etc.

The interiors seem to be amazing because the works were done by Monica Khanna who was familiar for the interiors. As well, the decor and the interior represents the cultural style of the state through the representation of furniture, paintings, etc. Palace on wheels India had 23 coaches in the train. Around 104 tourists can travel in the same train. Each coach is called and named by the former Rajput states. The interiors just match the ancient past, and look amazing. Each coach is said to have 4 cabins, with Wifi internet and also with the amenities that turn luxurious. This train has the 2 restaurants, which are named as the Maharaja and the Maharani, with the ambience of Rajasthan style. It serves all types of traditional cuisines.  When you board palace on wheels, the tour will last for 7 days and 8 nights. Enjoy palace on wheels travel once in your lifetime. 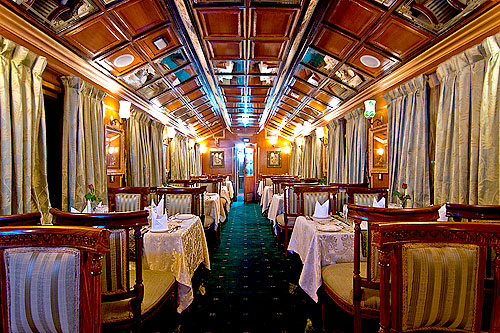